The problem of overweight containers has long been an issue for international carriers. When the SOLAS (Safety of Life at Sea) regulations were introduced in 2016 it was hoped this would resolve the problem, however this is still a major issue for all carriers. Shippers are still booking containers based on much lower weights and then make last minute amendments once they have the VGM confirmed. This causes major issues in planning vessels, sometimes with disastrous consequences. 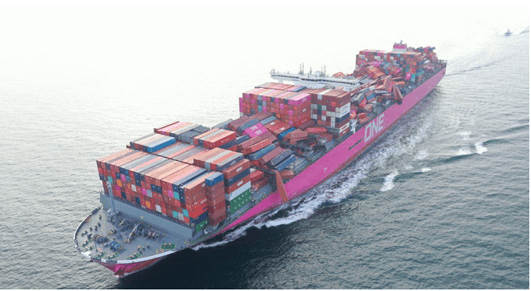 The ONE Apus arrives in Kobe Japan on 8th December 2020 after losing an estimated 1816 containers overboard.

In addition to the obvious dangers this causes, it also results in significant lost revenue according to the Japanese Carrier ONE line as it can mean that many containers have to be left behind. They are now targeting this as another area where they can further increase revenue and have announced the introduction of a Weight Discrepancy Fee. This will come into effect from on 1st July 2022 and will apply to cargo where the VGM weight deviates by more than 3000 kgs per TEU from the weigh declared on the bill of lading instructions. So far ONE line are the only carrier to introduce this but as we live in a time where it feels like  international carriers are introducing new charges for everything they can think of, it probably won’t be long before the other carriers follow their lead.

Manage Cookie Consent
To provide the best experiences, we use technologies like cookies to store and/or access device information. Consenting to these technologies will allow us to process data such as browsing behavior or unique IDs on this site. Not consenting or withdrawing consent, may adversely affect certain features and functions.
Manage options Manage services Manage vendors Read more about these purposes
View preferences
{title} {title} {title}
0
Your Cart
WhatsApp us